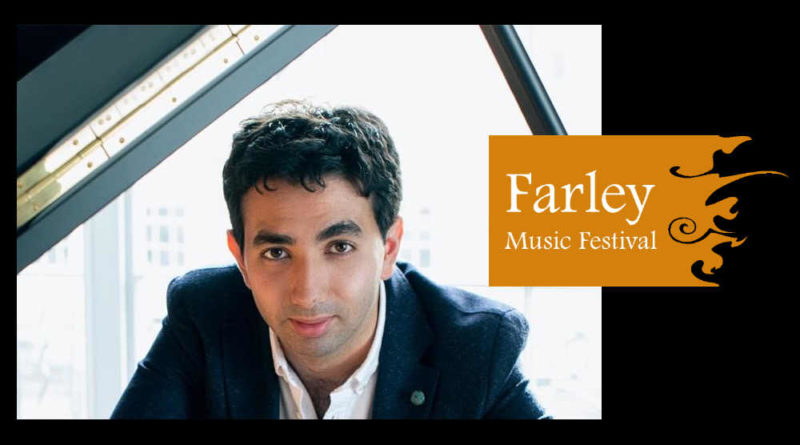 Karim is well known to Farley audiences from his previous visits. He last came in 2012 when he previewed some of the Schoenberg, he was preparing for his first album ‘Echoes From an Empire’ (Opus Arte – 2015). His new CD, ‘Legacy’ was released on Rubicon Classics in November 2018 and has been received with acclaim. His programme will contrast English virginal music of the 16th/17th century, of which Karim is a dazzling exponent, with more romantic repertoire.  Karim is a young player of real artistic stature who must be heard.

Twenty-seven-year-old Karim Said was born in Jordan. He moved to the U.K. in 2000 in order to study at the Purcell School, and later at the Royal Academy of Music with Tatian Sarkissova. He made his orchestral debut in 2009 with the English Chamber Orchestra at London’s Barbican Centre with Sir Colin Davis, and the West-Eastern Divan Orchestra at the BBC Proms with Daniel Barenboim. In 2015 Mr. Said released his first CD on Opus Arte, receiving critical acclaim from The Guardian and Gramophone magazine. The CD’s theme is based on a recital series that Mr. Said gave in 2013 at the Purcell Room as part of “The Rest is Noise” festival. Using the solo music of Schoenberg as its focus, these concerts included an on-stage discussion with the BBC’s Sara Mohr-Pietsch. Mr. Said’s development as a student of piano, composition, and conducting throughout his time at the Purcell School is documented in Christopher Nupen’s film “Karim’s Journey,” which in 2008 was broadcast internationally and in the U.K. on BBC4. He now lives in Berlin where he is mentored by Hinrich Alpers.

‘’..there was no mistaking the shape he gave to the music, the interpretative ingenuity and mischievous wit, and I came away wanting to hear more’’, Norman Lebrecht

At the age of nineteen, the Jordanian-born pianist Karim Said gave his Barbican debut playing a Mozart Concerto with the English Chamber Orchestra under Sir Colin Davis. A year later, in 2009, his BBC Proms debut resulted in a series of successful reviews  for his broadcasted performance of Berg’s ‘’Chamber Concerto’’ with Daniel Barenboim and the West Eastern Divan, of which Karim has been a member since 1999, receiving regular instruction from Barenboim. As a result of intimately studying the music of the Second Viennese School with his mentor, a great advocate of the repertoire himself, Karim’s passion for this genre has led him to curate a series of three solo recitals in 2013 at London’s Southbank Centre, exploring various composers in and around the School.

Born in Amman in 1988, Karim started learning the piano at the age of five with the Georgian pianist and composer Agnessa Bashir-Dzodtsoeva. At the age of eight he gave his first solo recital, and by ten he had won the first prize in a junior international competition in Bucharest and performed Mozart’s Concerto no.21 in C major in cities across his native region.

In 2000, at eleven, Karim moved to Hertfordshire in the UK to study piano, composition and conducting at the Purcell School of Music with Tessa Nicholsson, Jonathan Cole and Quentin Poole. During his school years, he performed at such venues as St. John’s Smith Square, founded his own orchestra, and conducted in masterclasses with Bernard Haitink. In 2005, he met the renowned Russian pianist and teacher Prof. Tatiana Sarkissova who continues to teach and inspire him with indefatigable energy.

The main events in Karim’s development between 2000 and 2007 were captured on film by the internationally acclaimed Christopher Nupen of Allegro Films in an hour-long documentary. The award winning ‘’Karim’s Journey’’ was shown on BBC4 as well as on Australian, Finnish, Swiss Belgian and Czech television. It helped launch an already growing performing career which has taken Karim to such venues as Vienna’s Musikverein, the Berlin Philharmonic, Salzburg’s Mozarteum, the Essen Philharmonic, the Great Hall of the Moscow Conservatoire, Milan’s La Scala, Manchester’s Bridgewater Hall, Abu Dhabi’s ‘Khubayrat’ and Seoul’s ‘Jangcheon Art’ Hall.

After being awarded a full scholarship to study London’s Royal Academy of Music in 2007, he received the first ever ‘’Enescu’’ Prize. Apart from his ongoing studies with Tatiana Sarkissova at the Academy, he has also been coached by such musicians as Thomas Brandis, Boris Bermann,  Menahem Pressler, Pascal Devoyen, Pierre Boulez (on his own music), Pierre-Laurrent Aimard and Robert Levin.

More can be seen and heard at these links:

To attend a concert in All Saints’ Church, Farley, is to be delighted by this charming seventeenth century church with its extraordinary acoustics, and to marvel at the quality of musicianship presented in a small, intimate setting. During June, the Farley Music Festival is held across five evenings when young pianists from the Royal Academy of Music astonish and surprise audiences, together with programmes featuring opera, choral and instrumental music.

Tickets available from:
Salisbury Playhouse (01722 320333) or on the door, to include an interval drink and parking